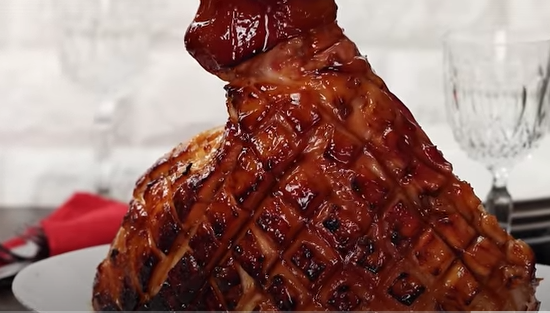 A holiday ham is a traditional centerpiece of Christmas dinner. Since hams are sold fully cooked, the only task for the cook is to glaze the ham and warm it up. If you are serving a large crowd, say, 16 to 20 guests, then you might consider buying a whole ham that includes both the shank half and the butt half, and weighs 14 to 18 pounds. Otherwise, for a gathering of ten or so, I prefer to buy a half ham, preferably the butt or upper part because it is tastier and more tender than the shank half. Read the label on the ham or ask your butcher for a slow-dry-cured and natural wood–smoked ham with no water added. Adding water in the curing process dilutes the natural taste of the ham.

Have ready a roasting pan just large enough to hold the ham without crowding. Place a flat roasting rack in the pan.

Remove the ham from the refrigerator 2 hours before you plan to bake it. Using a sharp boning knife, trim away any skin and all but 1/4 inch of the external fat from the ham. Set the ham fat-side up, and make parallel cuts 1/2 inch deep and 1-1/2 inches apart all over the ham. Give the ham a quarter turn and repeat to produce a cross-hatched diamond-like pattern. Stick a clove in the center of each diamond.

In a small bowl, combine the sugar, mustard, and bourbon and mix to form a paste. Rub the paste all over the ham. Set the ham, fat side up, on the rack in the pan, cover loosely with plastic wrap, and set aside until ready to bake.

Pour about 2-1/2 cups of the apple cider into the pan to a depth of 1/4 inch. Bake the ham uncovered, basting it at least twice and adding the remaining apple cider as needed to maintain a 1/4-inch depth, until an instant-read thermometer inserted into the center of the ham, not touching bone, registers 120°F (50°C), 1-3/4 to 2 hours. (It should take about 15 minutes per pound for the ham to reach an internal temperature between 120°F (50°C) and 125°F (52°C).

Transfer the ham to a carving board or warmed platter and tent with aluminum foil. Let the ham rest for 20 minutes before carving to allow the juices to set.

Meanwhile, pour the pan juices into a 4-cup heatproof measuring cup. Set aside for 5 minutes to allow the fat to rise to the top, and then spoon off the fat and discard. Pour the defatted pan juices into a small saucepan and bring to a simmer over medium-high heat. Whisk in the maple syrup and cayenne pepper. Taste the sauce. If the flavor is concentrated and tasty, then whisk in the cornstarch mixture to thicken the sauce. If the sauce tastes thin, then simmer the sauce for a few minutes to reduce the pan juices and concentrate the flavors before adding the cornstarch mixture. Add the 1 tablespoon bourbon, if desired, and keep warm.

Use a sharp carving knife to cut the ham into thin slices. Pour the sauce into a warmed sauceboat and pass at the table.