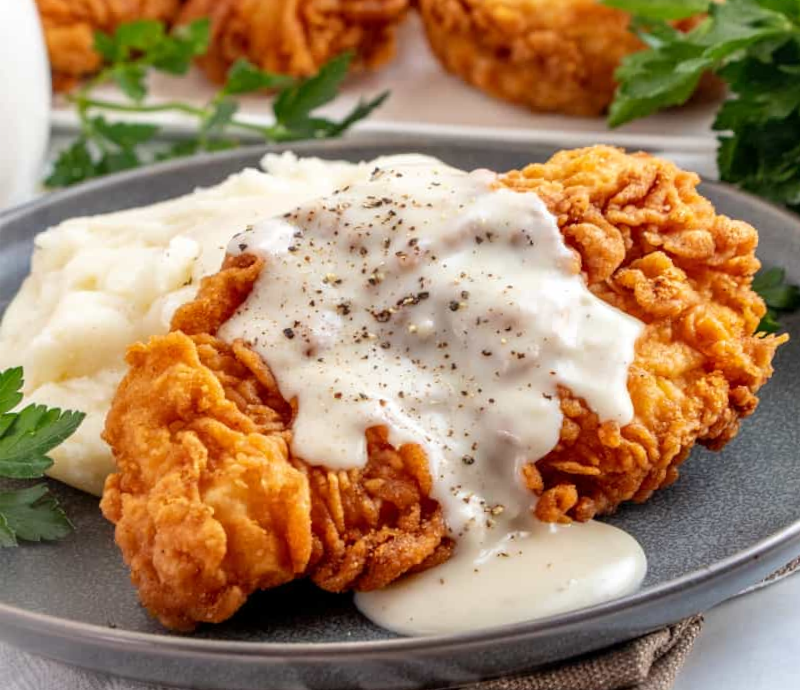 This Southern staple can be found in just about any restaurant in every state south of the Mason-Dixon line. It's also called "chicken-fried steak," since the steak is pounded flat, coated in crumbs, then panfried like chicken. For a real blue-plate special, round this out with some mashed potatoes, buttermilk biscuits, and Southern cooked greens.

Place the steak on a plastic wrap-covered work surface and cover with another piece of plastic wrap. Pound the meat to a 1/4-inch thickness with a meat mallet. Season both sides of the meat with 1-1/2 teaspoons of the Essence or Creole seasoning.

Fry the bacon in a large skillet until just crisp, 6 to 8 minutes. Using a slotted spoon, transfer the bacon to paper towels to drain, leaving the fat in the pan. Set the pan aside.

Reheat the bacon fat in the skillet over high heat until very hot but not smoking. In batches, without crowding (you may only be able to cook one portion at a time), carefully add the meat and fry until golden brown, 3 to 4 minutes on each side. Transfer to paper towels to drain.

Add 3 tablespoons of the reserved seasoned flour to the pan. Cook over medium-high heat, stirring constantly, for about 2 minutes, to make a light roux. Add the onions and cook, stirring often, until softened, about 4 minutes. Whisk in the remaining 2 cups milk, the salt, and pepper and bring to a boil. Reduce the heat to medium-low and simmer until the sauce is thickened and there is no raw flour taste, about 5 minutes. Stir in the bacon.

Serve the steaks with the hot gravy.