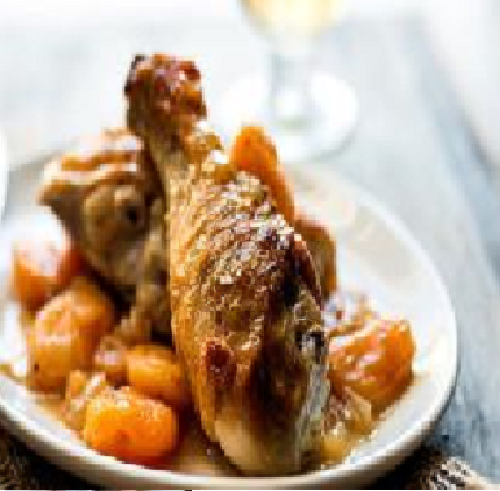 Chicken with dried apricots is hardly a new idea, but it’s almost always too sweet, and the routine addition of cinnamon and cloves makes the whole thing taste more like dessert than dinner. Take them away, add a little vinegar to counter the fruit’s sweetness, improve and simplify the cooking technique, and you have an attractive dish for a winter meal.

Here, the chicken is carefully browned, then turned skin-side up and braised in the apricots and the liquid. Do not turn it again, so the skin remains nicely browned and even a little crisp, rather than becoming mushy.

Fruit that has been dried with sulfur – the most common method – is moister and much faster to tenderize than fruit dried organically, which will need at least a couple of hours of soaking before cooking.

Put the apricots in a small bowl (or a 2-cup measure) and add the vinegar, wine, and water to cover, about 1/4 cup. Let soak while you brown the chicken.

Turn the heat to medium-high under a 12-inch nonstick skillet and add the chicken, skin side down. Cook, rotating the pieces (not turning them) so they brown evenly. When they are nicely browned – 10 to 15 minutes – turn them so they are skin side up, and season with salt and pepper. Make a little space in which you can add the onion and cook, stirring the onion occasionally, until it has softened a bit, 1 to 2 minutes.

Add the apricots and their liquid and bring to a boil. Cook for a minute, then turn the heat to low, and cover. Cook until the chicken is done, 15 to 20 minutes; do not turn while it is cooking. Remove the lid, raise the heat and season the chicken well with salt and pepper. Boil out any excess liquid; you do not want the sauce to be too watery. Taste and adjust the seasoning if necessary, and serve.