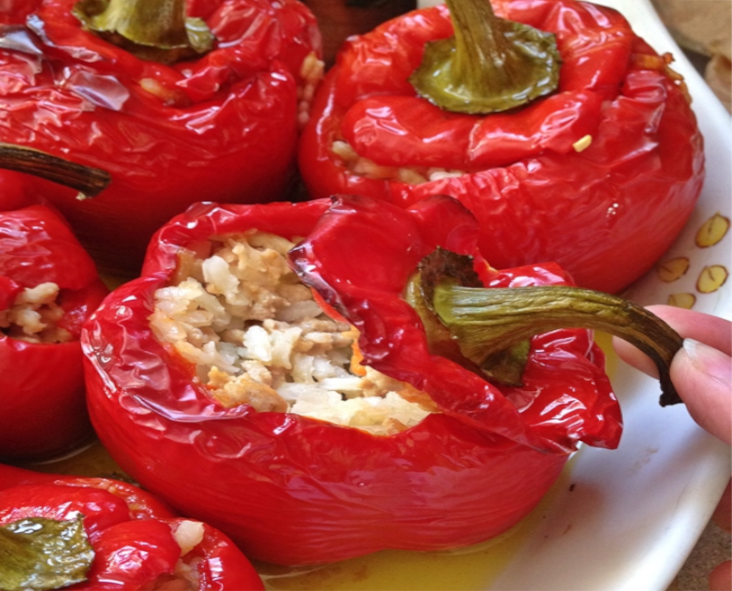 Cut around the base of each pepper stem and gently pull the stem out. Trim off the seeds and keep the tops to hold the stuffing in. Blanch the peppers in boiling water for 60 to 90 seconds, until just tender. Drain and shock in an ice bath. Drain again very well before stuffing.

Fit a stand mixer with the paddle attachment and beat the cream cheese until light and fluffy. Crumble in the feta cheese and beat until well mixed. Quickly mix in the rice, raisins, and mint, breaking up any raisins that are sticking together.

Divide the filling into 6 equal portions. Moisten your hands. then roll each into a lozenge about the same shape as the peppers. Slip the lozenges into the peppers, pressing them gently to get the filling into all the nooks and crannies. Put the tops back on and set the peppers aside.

Grill the peppers over a medium-high flame until caramelized nicely on all sides and hot through.

Combine the cherry tomatoes, basil, and parsley in a bowl. In a small bowl, whisk together the vinegar, lemon juice, salt, and pepper until the salt is dissolved. Whisk in the olive oil, then pour over the tomatoes and herbs and mix gently. The vinaigrette should be mixed no more than 20 minutes or so in advance of serving.

Place a few spoonfuls of vinaigrette on each of 6 plates. Top with a stuffed pepper, sprinkle with almonds, and drizzle with crème fraîche.