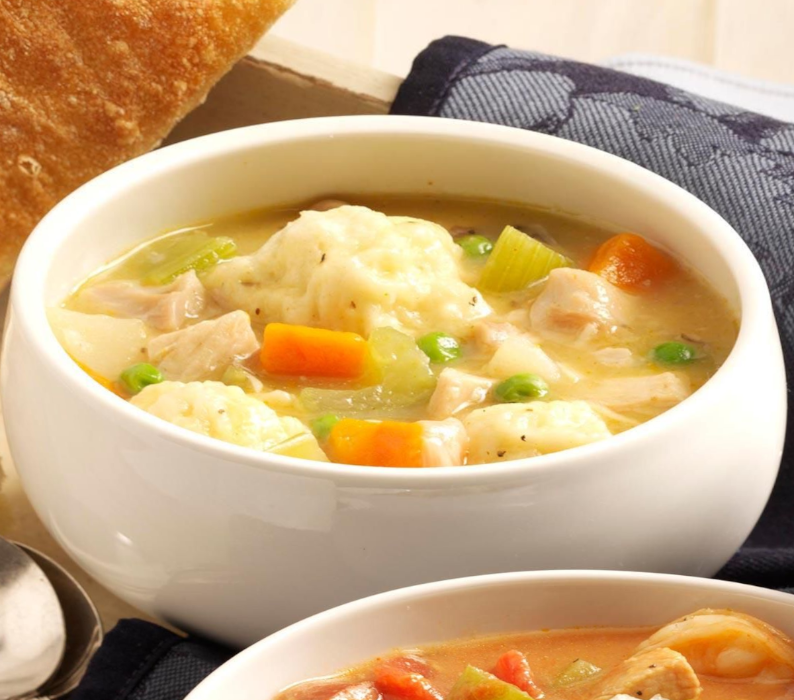 The dish is a Cracker favorite for a lot of reasons, economy not the least, as most Cracker homesteads had a flock of chickens pecking around the yard and a cook who could ring a chicken's neck in two-seconds flat and pluck it even faster. If you've ever watched a Cracker woman take on a chicken, it goes something like this: Grab, click, and yank, yank, yank; after a flurry of feathers, a naked little bird emerges.

If you're of Italian persuasion, you'll notice that dumplings are really just fat noodles cooked in a bubbling preparation of chicken, stock, and whatever else floats your boat. I sometimes throw in dried onions or green onions or soy sauce or any other spice I see when I open up my cabinet. Test, taste, and ponder. Make it your own.

First decide on your basic bird. The cheapest, most common these days are the little chickens you buy sealed in plastic, whole or cut up. They're cheap, but it's aggravating to pick out the bones, so decide how much work you're willing to do before choosing your bird: canned and boned (and not as good) or the whole bird (better). Lately Tyson and all the big chicken people offer bags of breast and tenders, all ready to toss in the pot. They're skinless, so brace yourself for the difference, but, hey, it's still chicken.

2. Put whatever chicken you choose in a big pot and add the onions, water, and broth. If you like the livers, stick them in, too, but do warn everyone in advance. I myself am not a fan. Add the salt, pepper, rosemary, bay leaves, thyme, and lemon juice.

3. Cook uncovered over low heat till the chicken falls apart completely. Let it cool, then set yourself the task of picking out all them dang bones, and there are a lot of them. When you're done, fish out the bay leaves and return the chicken to the pot. Make your dumplings.

Put 2 cups flour in a large bowl and blend in the salt.

Cut in the shortening with a fork or pastry blender (just as you do a pie crust).

Stir in enough of the milk to make a soft dough and shape it into a ball.

Sprinkle your countertop with another cup of flour. Roll out the dough 1/8 inch thick with either a rolling pin or a round glass. Cut into roughly 2 x 2-inch squares (or just pinch them off before rolling the dough if you like, into whatever shape fits your fork).

Bring the pot of chicken and stock to a low boil. Slowly drop the dumplings into the broth, making sure each one is submerged a moment before you put in the next one, or they'll stick together.

Cook over medium heat for 10 minutes, stirring occasionally to make sure they don't stick. Cover the pot, turn off the heat, and let them set for a few minutes to mix and mingle and get to know each other.

Some people like this dish dry (with dumplings that stick together) and some like it soupy. You decide which way you like it and add a little water to make it soupier if that's what you like.