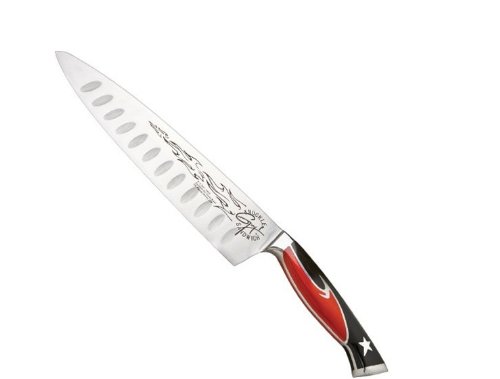 Patented ergonomic design; created to be an extension of your hand; natural comfort

Comments: There are two issues to discuss here – the Guy Fieri part, and the Ergo Chef part.

Guy Fieri, who shot to fame as the winner of The Next Food Network Star in 2006, and now has multiple television shows on just about every network and restaurants in just about every California city, says it is rare for him to endorse or be associated with a product.

Ergo Chef, which has been in business since 2002, grew out of the conviction of chef Scott Staib that there had to be a more ergonomic design for kitchen knives. He worked with his brother Mike, an engineer, and with designers at the family’s design and machining company to examine how a conventional knife fits in a chef’s hand, the movement of a chef’s wrist and hand during chopping, and the angle at which a knife hits the cutting board. They developed a knife with a slightly angled handle, which solved Staib’s discomfort with regular knives within three weeks. He created 50 prototypes and sent them to chefs, student chefs, and culinary teachers across the country, and from the positive response, Ergo Chef was born.

Fieri has put his design stamp on a new line of Ergo-Chef knives and the result is fantastic. A knife that works wonderfully and feels great in the hand looks seriously cool.

According to the company, the patented ergonomic design is created to be an extension of your hand for natural comfort. The knife made of high carbon German stainless steel (although the knife is made in China) for stain resistance, and the blade is precision heat treated to keep a great edge. The full tang and abbreviated bolster add strength and balance. Hollow ground ovals in blade promote less sticking of food and smoother cuts. There is a crisscross knurl on the end of the handle for pulverizing garlic, nuts, etc.

For his part, the spiky-haired, sunglasses-wearing Fieri, says, “things gotta look cool.” The design grew out of his love for hot rods and rock and roll. He also says he used Ergo Chef’s knives in his home kitchen, in restaurants, on TV, and in his travels for a year before he was willing – and then eager – to join in the partnership.

In addition to the black and red flame-wave design and polished star on the resin and stainless steel handle, the sides of the blade have been laser-etched with flames and Fieri’s Knuckle Sandwich logo. A high-school senior (boy) of our acquaintance (for whom heating frozen pizza constitutes the height of cooking) saw the knife and went nuts.

*For readers too young to remember and those outside the United States, classic television advertisements for Reese’s Peanut Butter Cups featured two people – one snacking on chocolate, the other inexplicably carrying a opened jar of peanut butter down the street – bumping into each other, uttering the immortal lines, taking bites of the peanut-butter slathered chocolate, and finding them to be a match made in heaven.