Is Sulfur in both Egg Yolks and Whites?

Is there sulfur in both the yolks and the whites of eggs?

You're not going to believe this, but your United States Department of Agriculture does not report on the sulfur content of any part of an egg. (And it's not just eggs! The USDA will tell you the amount of manganese or selenium in just about any food down to the third or fourth decimal point, but doesn't utter a peep about sulfur. Is it any surprise people wonder where their tax dollars go?)

Once again Ochef must step in to set the record straight. The USDA does not reference the sulfur content of foods because it is itself a component of several amino acids and vitamins, which the USDA does quantify. At least two of those amino acids - methionine and cystine - are present in both the yolk and white of the egg, so sulfur is also present in both parts.

We're thinking we might just get an honorary doctorate from those folks in Lincoln for our resolution of the great egg-sulfur debate. "Dr. Ochef" - has a nice ring to it, don't you think? 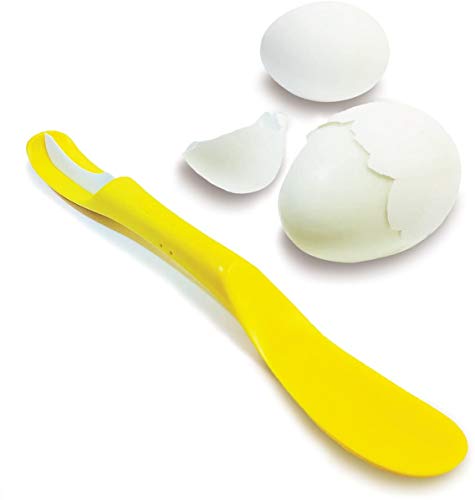 WHAT EGG-ACTLY IS IT? - the EggXactPeel from FusionBrands is the perfect kitchen tool for cracking and peeling hard boiled eggs. A quick and easy to use peeling solution that cracks, peels, and rem...