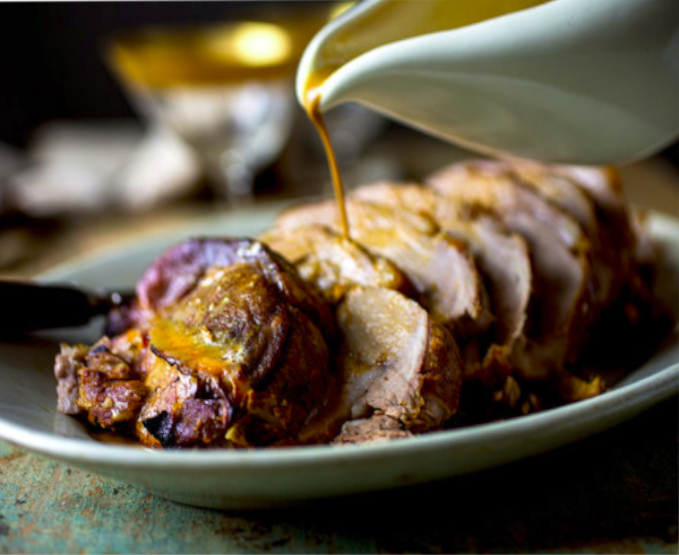 This brilliant Italian dish begins with pork half-submerged in milk. In the course of long cooking, the milk breaks down into a dark and delicious sauce, whose main character comes from the browned milk solids that remain after most of the water in the milk has boiled away. The roast picks up a delicious crust along the way and remains moist inside.

In Sumatra, there is a similar dish, rending, which stews water buffalo in coconut milk. After a time, the white coconut milk breaks down into a clear oil and the meat cooks and browns very much as pork roast does in cow's milk. In the interest of practicality, I am not giving a recipe for rending, but perhaps there is a basis here for future research into cultural similarities between Bologna and Palembang.

Melt the butter in a heavy saucepan slightly larger than the pork. Rub the pork all over with salt and pepper. Push the garlic clove into the center of the rolled meat, along with the coriander seeds.

Brown the pork on all sides in the butter. Add the ham and onion and lightly brown.

Bring the milk to the boiling point, but stop there, before it foams up and erupts. Pour over the pork and cook for about an hour and a half, uncovered. The milk should bubble noticeably. Turn the meat and baste from time to time. After about an hour, stir the skin on the surface of the milk back into the milk. Also stir in what you can from the sides of the pot. After another half hour, the milk will have reduced markedly and converted into a nice brown sauce with toasted milk solids in it. Cut off the string from the pork and discard.

Place the roast on a serving platter. Slice and serve with its sauce.