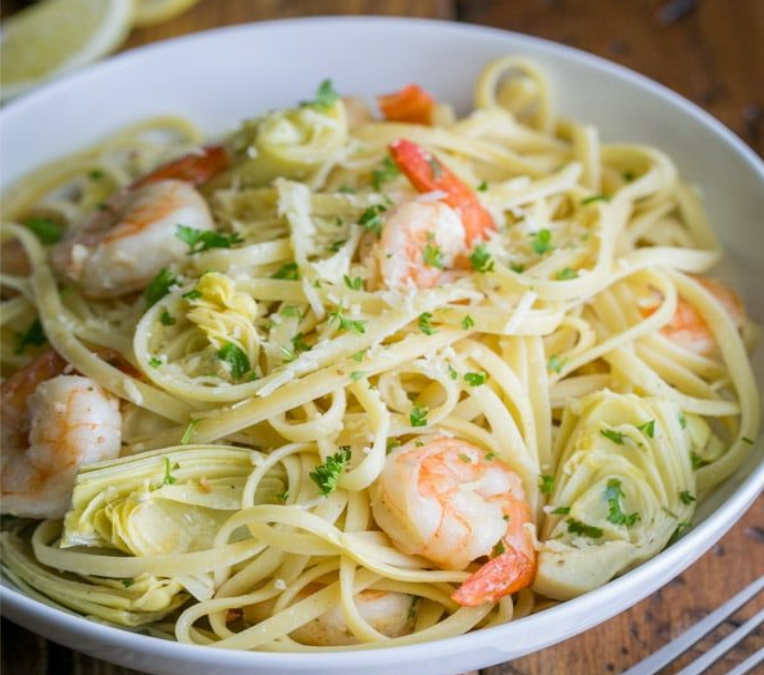 I especially like this dish with small gulf or Maine shrimp, and if you stumble on either, it is reason enough to plan this pasta for dinner. Any shrimp will be good, but make sure that they are small enough to be eaten in one mouthful. This recipe begins by making a quick and easy broth with the shrimp shells.

The Pasta: Long, narrow, flat noodles such as linguine or the thinner linguine di passero will provide the maximum surface for collecting the flavorful broth. Otherwise, use thin spaghetti such as spaghettini or capellini.

Rinse and pat the shrimp dry. Peel them, and put the shells in a small saucepan. Pour in the water, season with the salt, and bring the water to a boil Cover the pan, and simmer for 15 minutes, then strain, pushing firmly on the shells to extract as much flavor as possible. You should have about 1-1/3 cups. If you have more, pour it back into the saucepan, without the shells, and boil it to reduce. If you have too little, wait until the pasta has cooked and add some of the pasta water to the pan.

Bring the water to a boil in a large pan, and when the sauce is almost finished, drop the pasta into the boiling water and give it a stir. Heat 3 tablespoons of the oil in a 12- to 14-inch sauté pan. When the oil is hot, stir in the shrimp and sauté, stirring frequently, just until they turn pink and opaque, not until completely cooked, and immediately remove them from the pan with a slotted spoon. The shrimp will go back into the pan after the sauce is made, so if they cook too long here, they will be overcooked at the end.

Reduce the heat, and add the remaining 3 tablespoons of oil to the pan. Toss in the garlic, and cook gently over low heat just until it begins to soften. Stir in the peperoncini, lemon zest, and oregano. Cook gently for 2 minutes, just to blend the flavors. Pour in the wine, broth, and lemon juice, and raise the heat so the liquid comes to a lively simmer. It should take about 10 minutes for the sauce to reduce by about half to just over a cup. Don’t measure; eyeball it. Taste the sauce at this point, keeping in mind that it will further reduce when the pasta is added; it should have a good hint of acid. If it does not, add more lemon and taste again. Correct the salt and pepper. Return the shrimp to the pan.

Remove about 2 cups of the pasta-boiling water, and pour some into a pasta bowl to heat; keep some nearby in case you need it to loosen the sauce. Drain the pasta when it is just shy of al dente, and toss it into the pan with the sauce. If the liquid in the pan has reduced too much to coat the pasta and finish the cooking, add some of the pasta water; if there appears to be too much liquid, wait. The pasta will absorb some, and boiling will reduce the rest. Turn the heat up and stir the pasta around until the sauce has reduced and the pasta and shrimp are completely cooked – a minute or two.

Transfer to the drained warm pasta bowl, sprinkle with the parsley, and serve immediately.

Linguine with Shrimp and Capers. Add a tablespoon or two of rinsed capers to the pan with the peperoncini, zest, and oregano.

Linguine with Shrimp and Fennel. Instead of peperoncini and oregano, use 1 cup of thinly sliced fresh fennel and 3 tablespoons of chopped fennel tops. Sauté the shrimp in the 3 tablespoons of olive oil, and when they are removed, use 3 tablespoons of butter instead of more oil. When the garlic is soft, stir the fennel, zest, and tops into the pan, and cook slowly with the cover on until the fennel is tender. Substitute 1/2 cup of heavy cream for the lemon juice.

Linguine with Shrimp and Tomatoes. Add 1 cup peeled, seeded, juiced, and chopped fresh tomatoes to the pan after the aromatics have cooked.

Linguine with Creamy Shrimp Sauce. For a lush cream sauce, use 3 tablespoons of butter, instead of the olive oil, to sauté the shrimp as above. Set them aside, and do not add more fat to the pan. Pour the shrimp broth into the pan, bring to a boil, and scrape the pan to deglaze. When the broth is reduced by half, pour in 1-1/2 cups of heavy cream, and reduce again by half. Stir in a tablespoon or two of lemon juice (taste to see what you need) and, if desired, a couple of tablespoons of snipped basil. Return the shrimp to the pan briefly to heat, and serve with fettuccine or tagliatelle. I like to toss in about 3/4 cup blanched asparagus spears at the end with the shrimp. A pound of bay scallops is lovely cooked this way, but I recommend that you do it only with fish broth, since bottled clam juice is too strong and chicken broth too weak.