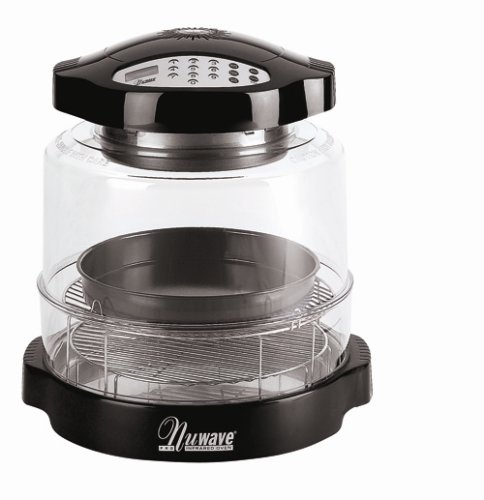 Comments: How can we say this nicely? We don’t necessarily believe everything we see on TV. And infomercials, well, occasionally we are dubious.

That’s why the NuWave Pro Infrared Oven came as such a nice surprise. It may not be heaven on earth, but it does many of the things that is says it will do pretty well or even very well.

It is simple to use. In most cases, set the amount of cooking time and press Start. The heat setting is adjustable from 1 (195°F (90°C)) to 10 (350°F (175°C)), but most of the manufacturer’s recipes and cooking recommendations use full power. The maximum cooking time for full power is 2 hours; for anything lower than that, you can cook for as long as 10 hours. There is a timer on the digital units, but it is only a timer – it will not turn off the heating element.

There is an analog version of the NuWave that use knobs instead of buttons, and costs a little less.

Our biggest complaint is that the heating element – which puts out some heat – may be too near the food, and although there’s a lot of convection blowing going on, it is possible to overcook what you’re making. The NuWave literature says it cooks 50% faster while using 70% less energy, but for us, if done more quickly means overcooked, that’s not a victory. You can learn to watch your food more closely or cook on a lower power setting, but it may just take a little time to get used to cooking in a NuWave. We have used a probe-type thermometer every time we have cooked meat in the NuWave to be certain the meat was done on the inside.

Our oven came with the Extender Ring Kit that lifts the heating element further from the bottom of the oven (and allows for multi-level cooking and roasts and poultry that weigh more than 10 pounds). We use it every time for the added space it gives between heating element and food. If your NuWave oven doesn’t include it, you might want to add it.

You should be able to cook just about anything in the NuWave that you can cook in a conventional oven – meat, poultry, fish, vegetables, pizzas, cookies, pies, and other desserts. It will also cook foods from frozen.

The oven does take up a bit of space, and when you open it – by setting it on Pause and tilting the power head and connected transparent dome onto the dome holder – it takes up even more space. If you take the manufacturer up on the promise that most of it can be cleaned in the dishwasher, you’ll use up large amounts of space. (The power head/heating element is never to be submersed in water; it is cleaned with a damp cloth.)

If that sounds like a lot of criticism, we didn’t really mean it. Would we use this to replace a conventional oven or a convection oven? No, even though the infomercials suggest that’s what’s going to happen. But we would use it regularly in an apartment or other setting where there was no oven. And we would definitely use it at holiday time, when it is so easy to run out of oven space.

We mentioned recently in a college class that we are auditing that we had a NuWave oven, and essentially got polite shrugs from people who have seen the infomercials. It took a little effort to convince them that we really like it.