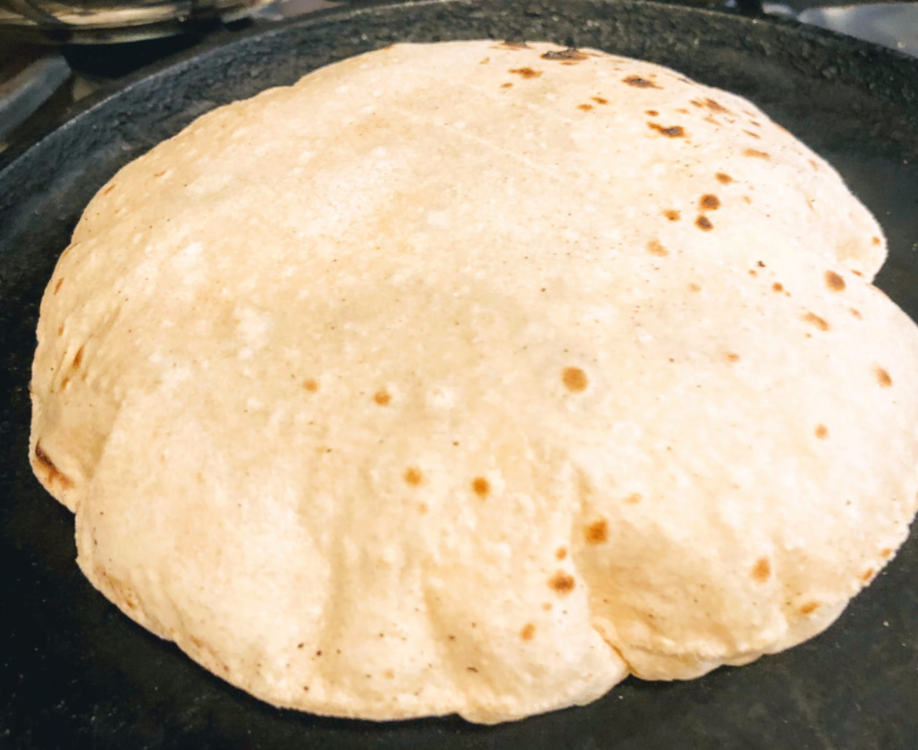 [Chappati flour, or atta or ata, is a fine whole-wheat flour made from hard, low-gluten wheat. It is readily found in Indian markets.]

Put the flour in a bowl. Slowly add enough water so that you will be able to gather the flour together and make a soft dough. You may need about 2 1/2 tablespoons less than a cup of water. Knead the dough for 7 to 8 minutes or until it is smooth. Make a ball and put it inside a bowl. Cover the bowl with a damp dishcloth and set it aside for half an hour.

If the dough looks very runny, flour your hands and knead for another few minutes. Form twelve equal balls and dust each with a little flour. Keep them covered.

Set a cast-iron griddle or skillet to heat over a medium-low flame. Allow at least 5 minutes for that. Keep about a cup of dusting flour near you. Remove a ball of dough and flatten it between the palms of your hands. Dust it on both sides with flour. Roll it out, as thinly and evenly as you can, aiming for a 5 1/2-inch round. When the griddle is hot, slap the roti onto its heated surface. Cook for about a minute or until soft bubbles begin to form. Turn the roti over. (Most Indians use their hands to do this.) Cook for half a minute on the second side. If you have a gas fire, light a second burner on a medium flame and put the roti directly on it. Using tongs with rounded ends, rotate the roti so that all areas are exposed to the shooting flames.

Take 5 seconds to do this. Turn the roti over and repeat for about 3 seconds. The roti should puff up. Put the roti on a plate and cover with a clean dish towel. Make all roti this way. If you have an electric stove, place the griddle and roti under a broiler for a few seconds, until the roti puffs up. Serve hot.