Round Collapsible Cupcake and Cake Carrier 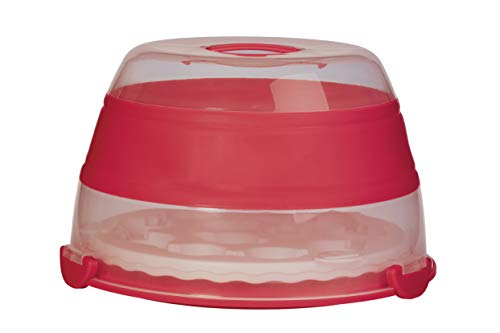 Trays can be removed to accomodate layered round and square cakes

Collapsible lid features a carrying handle for easy transport; secured to the base with attached clips

Comments: OK, it’s not petite even when collapsed, but there are just times you need to carry a good-sized cake or two dozen cupcakes. Now you can, and when you’re done, this carrier collapses to a bit less than half its height for storage.

The two cupcake trays, one of which has extendible legs, have fairly deep finger indentations, which makes it a little easier to get the cupcakes out. The trays can be removed if you want to transport a round or square cake in place of cupcakes. The bottom has a pattern that serves as a slicing guide for round cakes.

There are some comments online from people complaining that the carrier handle broke, resulting in cake/cupcake disasters and unutterable disappointment. We have tugged and tugged on the handle of our carrier, and it feels pretty sturdy to us. At the same time, it requires some effort to tug the carrier top from the collapsed position to the extended position, and perhaps it would be wise to take the carrier apart and push the top into the extended position from inside, rather than pulling it up with the handle. That would avoid putting so much pressure on the handle and also on the latches that hold the bottom in place. If the cake you’re carrying is particularly heavy, valuable, etc., you may find more peace of mind if you carry it from the bottom. That way you also won’t wonder if you’ve latched the bottom securely.

The whole thing can be washed in the dishwasher, but, good heavens, it takes a lot of space, and can you not wash off a little frosting by hand?

We have had way more cupcake-transport disasters without a cupcake carrier than with one, so if it’s all the same to you, we’ll happily go on using this one – and if we feel like living on the edge a little bit, we’ll carry it by the handle.