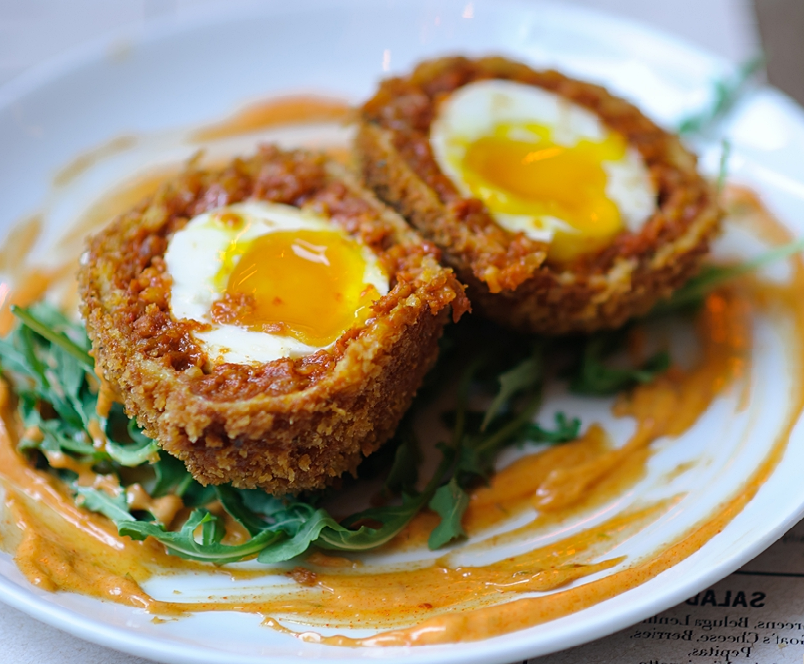 Following his exploration of Chesapeake Bay, Virginia, in 1631, William Claiborne set up a trading post on Kent Island, the largest of the bay’s islands. A colony developed and in 1638 the island became part of Maryland. Claiborne’s Landing at the entrance to Stevensville is named after the explorer. One of the best-known American Claiborne descendants is the late notable food writer and cookbook author, Craig Claiborne, who stated that one of his favorite snacks was Scotch Eggs, fried sausage-covered hard-cooked eggs. He described them as being “one of the most basic concepts of cooking.” They are favorite pub and picnic fare, enjoyed particularly at Scottish Gatherings, and are also good starters.

Shell eggs; wipe dry with paper towels. Roll each in flour to coat lightly. Set aside. In a large bowl combine sausage, onions, and parsley. Season with salt and pepper; mix thor¬oughly. Divide mixture into 6 equal portions; flatten into thin rounds. Place 1 floured egg in the center of each round; cover completely with sausage, patting it well. Dip in eggs; coat evenly with breadcrumbs. Place on a large plate. Refrigerate, covered with plastic wrap, up to 12 hours.

To cook, heat 3 inches oil in a deep-fat fryer. Fry eggs, 1 or 2 at a time, turning them, in hot oil (325°F (160°C)) until crisp and golden, about 7 minutes. With a slotted spoon, transfer eggs as they are cooked to drain on paper towels. Serve hot or at room temperature, plain or with mustard.