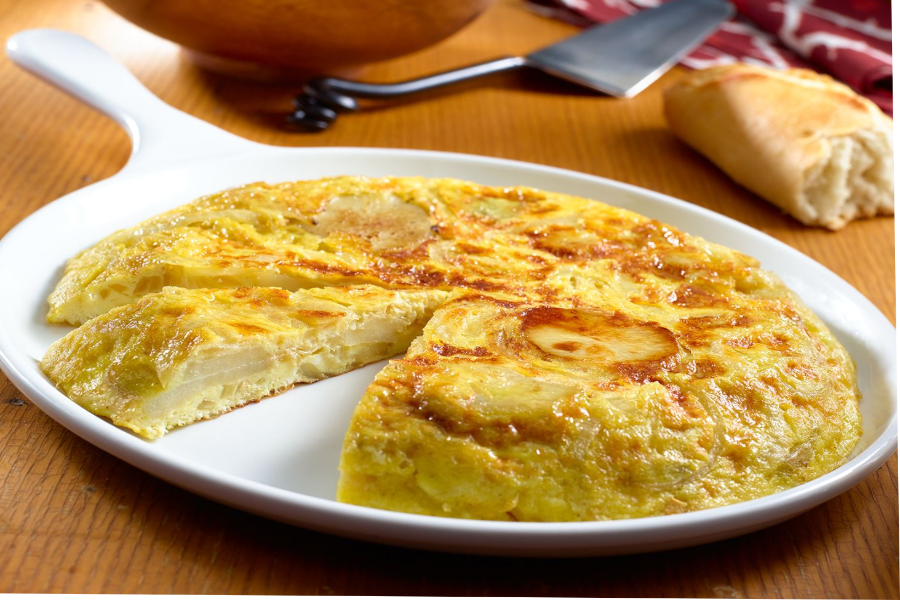 In the United States, when we make a Spanish omelet, it is a rolled one filled with peppers and tomatoes - but this authentic Spanish version is flat (but usually thick) and filled with potatoes and onions. Tortilla means "little cake" and in this case has nothing to do with the "little cakes" of corn or wheat flour called tortillas in Mexico and Central America. In flat omelets, eggs assume a supporting role, binding the savory ingredients and adding richness while the emphasis is on the filling. A flat omelet can be thick or thin, but it is always too hearty and awkward to roll or fold; instead, it is served in wedges, much like an open-faced pizza. Flat omelets can be made ahead and served at room temperature.

Heat in a large skillet over medium heat: 2 tablespoons olive oil Add: 1 large onion, cut into 1/8-inch-thick slices Salt and ground black pepper to taste. Cook until the onions are soft and golden, reducing the heat as they cook, about 20 minutes. Remove to a large bowl.

Heat in the same skillet over high heat: 1/4 cup or 4 tablespoons olive oil. Add: 1 pound red-skinned potatoes, peeled and cut. Cook until golden brown, 10 to 12 minutes. Reduce the heat to medium-high if the oil gets too hot and smoky. Toss the potatoes often with a metal spatula, separating the slices that stick together. Some will stick together no matter what you do, and that is fine.

Add the potatoes to the egg mixture and toss to coat the slices well with the egg. Return the skillet to high heat to heat the remaining oil in the pan. When hot, add the egg mixture and immediately reduce the heat to low. Let the omelet cook for 3 to 4 minutes, undisturbed, until the bottom is golden and the egg is two-thirds to three-quarters set. Shake the pan from time to time to make sure the omelet does not stick. If it does, slide a metal spatula under the egg to free it from the pan and continue cooking. Place a lightly oiled large heatproof plate upside down over the omelet and flip the skillet to turn the omelet over. Slide the omelet back into the pan to cook the second side. Cook until golden and set, 2 to 3 minutes more. Shake the omelet loose from the pan and slide onto a clean plate. Cut into 12 thin wedges and serve hot or at room temperature.