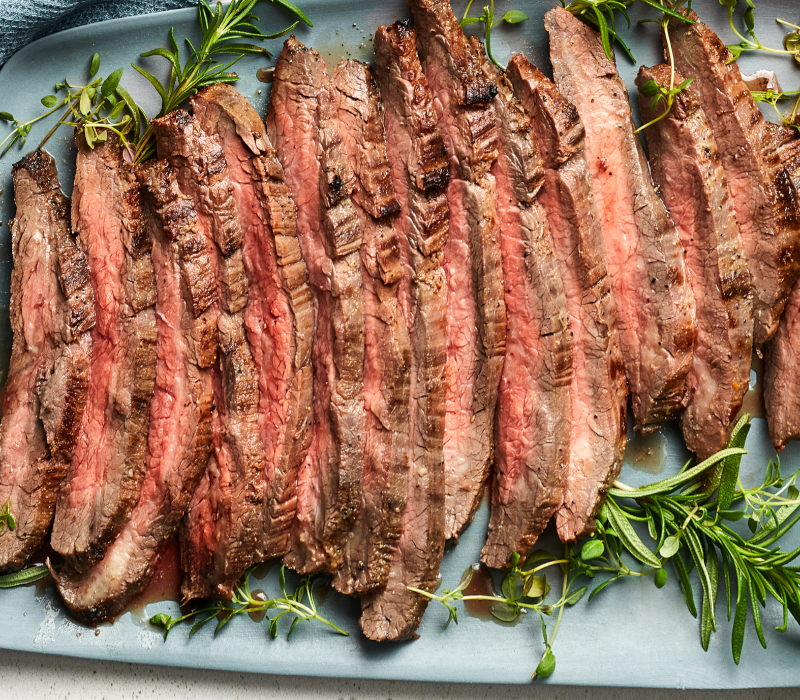 Despite what you might find at the local meat market, London broil is not a cut of beef but rather a method of cooking. It was one of the first recipes to become popular in early restaurants. Originally it was made only with flank steak, but over the years the name has been applied to almost any cut of beef that is very lean and not very tender. The original method of preparing London broil was to pan fry a flank steak to medium-rare, slice across the grain, and serve. This method is perfect for a flank steak because it becomes very tough if cooked too long. Today London broil might also be grilled or broiled.

Mince the garlic to a paste with the salt. Combine in a blender with the wine, vinegar, soy sauce, and honey and pulse until blended.

Place the meat in a heavy-duty resealable plastic bag or shallow baking dish and pour the marinade over the meat. Marinate in the refrigerator, turning occasionally, for at least 4 hours and up to 24 hours.

Heat the oil in a large, heavy skillet over high heat. Lift the steak out of the marinade and pat dry with paper towels. Sear the steak on one side, 4 to 6 minutes. Turn and sear on the second side, 3 to 5 minutes.

Transfer the steak to a cutting board and let stand for 5 minutes. Holding a knife at a 45-degree angle, cut the steak across the grain into thin slices. Serve hot.