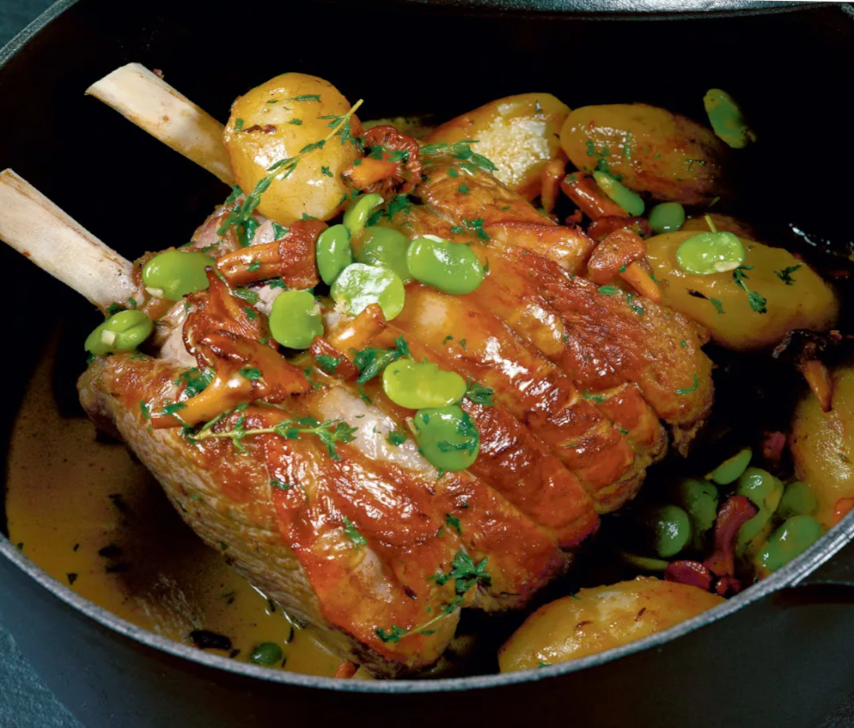 Veal Cutlets with Broad Beans and Girolle Mushrooms From Made in Great Britain, by Aiden Byrne

This is one of my favourite dishes. Veal isn't popular in Britain but few are aware that British veal is produced to the highest standards in Europe, with the animal's welfare a high priority. The result is the delicious rose veal which has pink, not white, flesh.

The veal cutlets should be well trimmed to remove any sinew and tied so that they maintain their shape during cooking. Season the meat.

Use a small knife to shape the potatoes into cocottes (resembling small eggs) and keep them in cold water.

Pod and blanch the broad beans in plenty of boiling salted water for about 1-1/2 minutes. Plunge them immediately into iced water to stop them from cooking further. Remove the shells and set aside.

Clean the mushroom by removing any soil and scraping down the base with a small knife to expose the clean stem.

Heat a large casserole pan, add a little oil and half the butter. Add the veal and cook to caramelize on all sides until golden brown. Remove the meat and the potatoes to the same pan. Caramelize again until golden brown, then add the mushrooms and thyme. Cook for a further minute. Remove the potatoes and the mushrooms from the pan and drain away the butter. Return the veal to the pan, and then add the potatoes, thyme and mushrooms. Add the port and reduce by half.

Meanwhile, add the cream to the pan and reduce by half. Add the blanched broad beans and a handful of chopped chervil and the remaining butter. Bring back to the boil.

Serve the meat sliced and simply pile the garnish next to it, pouring the sauce over the meat.